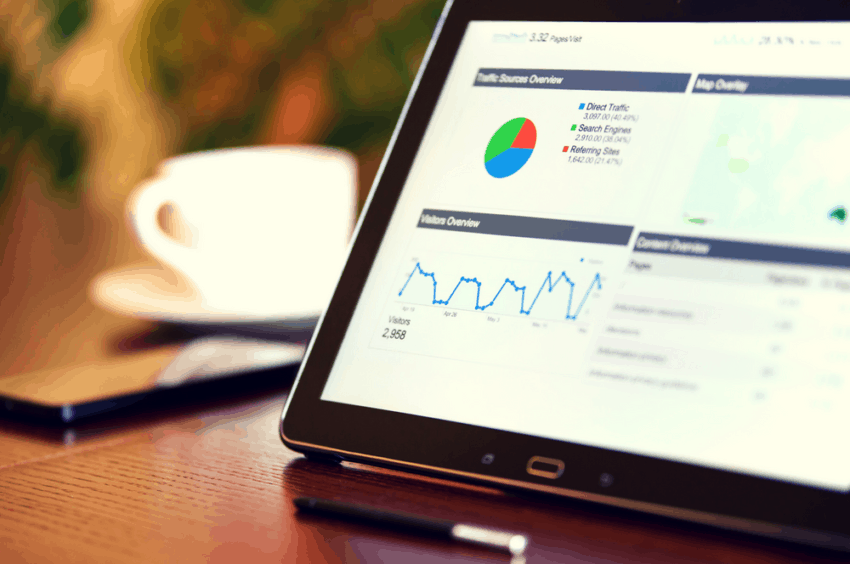 Every time Merkle releases one of their digital marketing quarterly reports, we here at DemandZEN act like little kids on Christmas morning. At the crack of dawn we wake up, run down the stairs screaming, and tear open the report. And just like kids on Christmas, all we focus on is that brand new shiny AdWords benchmark report we’ve waited months to get our hands on.

What is the Digital Marketing Report?

Each quarter Merkle releases the Digital Marketing Report (DMR) which takes an in-depth look at digital marketing channels including paid search, SEO, product ads, CSEs, programmatic, and social media. Merkle produces digital marketing insights into the major trends for each digital channel including share of traffic for search engines, digital platforms, and across devices. They compare these benchmarks to the trailing six quarters.

For this blog post, we want to exclusively focus on the AdWords benchmarks in the most recent Merkle report.

Google AdWords text ad spending was up 23% in growth year-over-year in Q4 of 2017, just narrowly down from Q3. CPC saw a 14% spike in growth, while click growth dipped to only 8% growth.

Our Take: Since there are fewer clicks and the same proportion of ad spend, it’s not surprising to see higher click through rates. One reason for this increase in CPC was due to the late push by some companies to close out the year on a high note. Q4 of 2016 also saw a sharp increase in CPC compared to Q3. 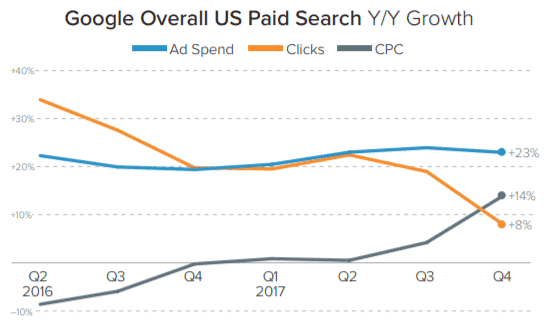 Spending on non-branded keywords saw an 8% decrease in growth from Q3 down to only 12% growth compared to 22%.The weaker, non-brand growth was complemented with higher spending growth on branded terms. This resulted in Search Network spend coming out nearly even with Q3 in terms of growth. Spending on Google Shopping ads was up 32% as this channel continues to have great consistent growth.

Our Take: For the first time since 2016, non-branded text ad spend had a lower growth rate than text ads in general. The increase of non-branded CPC might be one cause for this slow down. It appears many companies increased their focus on their branded terms to counter this decrease in non-branded terms. 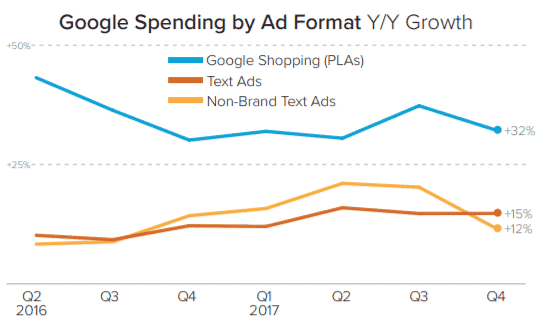 Year over year spending growth for mobile and desktop continue to be fairly strong with 38% and 21% growth respectively. Tablet spending is starting to make its comeback after being down for over a year. Tablet spending is still down 7% yearly, but this is an improvement compared to the -25% it was down in Q3 2017.

Our Take: The decrease in phone spending is not surprising. Ever since phone searches took over as the majority for Google search traffic, ad spend growth has slowly declined. Google started allowing separate tablet bidding in Q4 of 2016. Ever since, the growth rate has been very low. This is partially attributed to bidding previously being grouped with desktop. The year-over-year comparison still reflects that.This will be an area to keep a close eye on over the next few quarters. 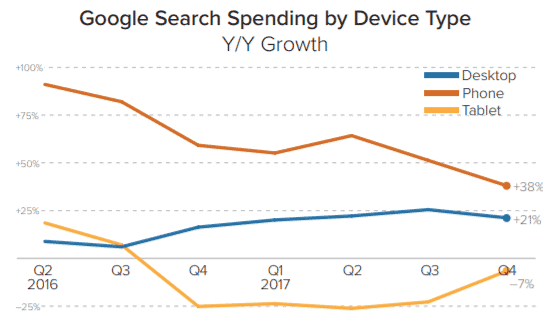 Ads in the third and fourth position produced a smaller portion of non-branded clicks. Ads in these positions produced only 12% of mobile-non-branded text ad clicks. Desktop saw slightly better results, generating 19% of clicks in these lower positions.

Our Take: This is very important to keep in mind when you are setting up your bid strategy. If you are not seeing as many clicks as you would like, check your average position. If you are content with lower ad placement, make sure you have strong ad copy and a solid offer that will entice searchers to click. 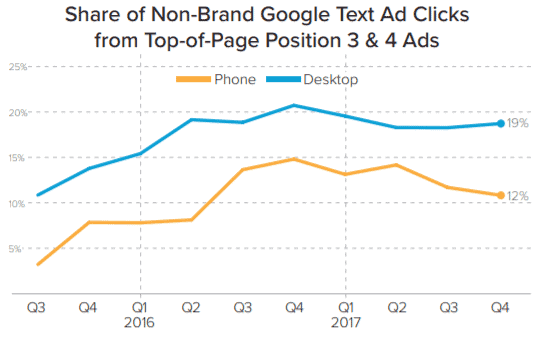 Custom Audiences Are Bigger Than Ever

Our take: Remarketing lists will always be the most important and relevant audience type. But companies are starting to put more weight on similar audiences and customer match lists. Companies are willing to pay a higher CPC for a custom audience that they know is relevant, as opposed to paying for a random search query. 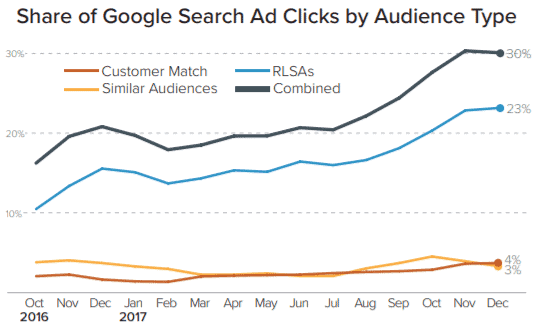 Phone and tablet spending rose to almost half of the overall total spend on the Display Network. Mobile click share increased even more by 62%. Mobile pricing, which is already lower than desktop, decreased even more.

Our Take: It’s really important to note that mobile is responsible for half of the overall spend on the Google Display Network. With the lower cost of mobile prices, this means that mobile is now responsible for the majority of overall clicks on this network. It’s more imperative than ever to make sure you’re using Google Display Network best practices. Take the time to make sure your ads, landing pages, and mobile bids are adjusted to reflect this mobile dominance. 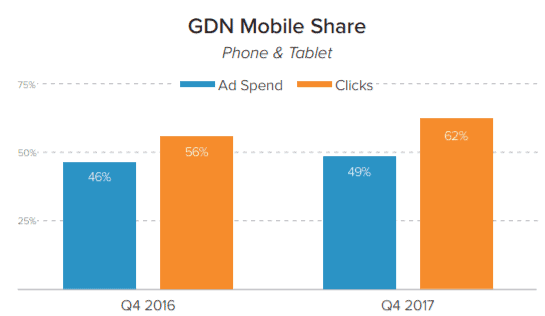 The outlook for Google AdWords is very positive. Companies continue to pour more and more money into AdWords to generate new business. But you need to take a step back each quarter and analyze the most recent AdWords benchmarks to see where your AdWords account stands compared to everyone else’s. For example, if you’ve been seeing higher CPCs and haven’t been able to figure out why, you can find your answer looking at the benchmarks.If you see that your company is falling below the AdWords benchmarks, ask the PPC experts at DemandZEN what you need to do to improve your results. 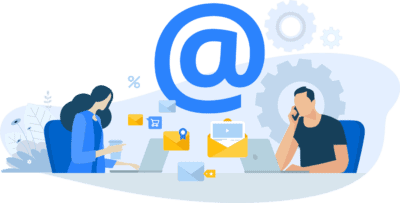 You’re likely very familiar with LinkedIn, but you may not know much about InMail. InMail is LinkedIn’s system ...
Read More → 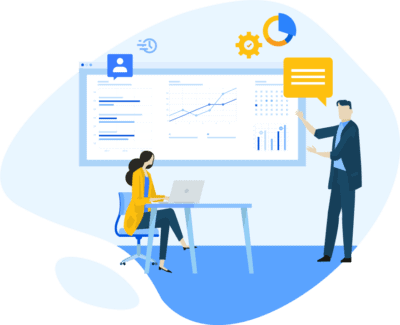 Of all the types of digital marketing reporting we’ve covered on the DemandZEN blog, PPC reporting is likely ...
Read More →
Posted in PPC