Twitter Character Limit Increase! What It Means For Your Social Media Strategy 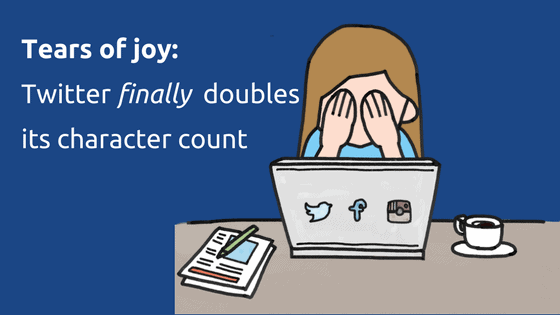 Looks like the holiday season started a little early this year. We can all rejoice that Twitter finally sided with its users and agreed with the sentiment that 140 characters is just not enough anymore. Twitter’s decision to double its character limit is a big deal. This blog post will take a look at the Twitter character limit increase and what it means for your b2b social media marketing strategy.

Over the past few years, Twitter has continuously made updates to its character limit. It’s changed the way we send direct messages, shortened (and then unshortened) our links, and it’s excluded photos and gifs from the character count to allow us to express ourselves better. But doubling the count is something completely new, but not unprecedented. Only a year ago, Jack Dorsey, Twitter’s CEO and co-founder, toyed with the idea of extending the character limit to 10,000.

After performing tests in September, Twitter chose to permanently double the character count for all countries where “cramming” was an issue. Cramming refers to condensing a message (or “cramming” it) into those 140 characters. It was also previously common for Twitter users to post a series of connected tweets.  While this practice might continue to an extent, it will make it easier for serial tweeters to tweet their hearts out.

For organizations with complex products or promoting an event with a lot of particulars, Twitter just made your lives easier. Finally, you can expand on those important details like booth number, time, and speaker without your tweet reading like bullet points.

Posting a link to your blog? You can go a little deeper than a single highlight or a lead-in question. Discuss what led you to write the blog, or why it’s important right now a little more freely.

How will this new character count change your Twitter hashtag strategy? For one, don’t go overboard. While you have more room to plug in those relevant hashtags, Twitter still isn’t Instagram. It still looks like spam.

But feel free to use a little more than the typical 3-5 recommended hashtags. Use hashtags within your tweet, and then tack on a few at the end. Feel free to keep your hashtag density the same (that’s 6-10 hashtags per post). But be mindful about how your tweet looks at a glance. Using 10 long hashtags doesn’t look so great. However, 10 shorter hashtags as both part of your main message and at the end will work fine.

Keep in mind that you should test what works best for your audience. Your particular target still might not like a huge number of hashtags in every post, but other audiences might not care or even embrace their love of hashtags. To land on the right number of hashtags per tweet, test and measure before landing on your perfect target.

Just because you have 280 characters doesn’t mean you should aim to hit the cap for every tweet. The Twitter character limit is meant to be a benefit. Expand your tweets when you need to. But Twitter users haven’t changed. They want bite-sized content that’s scannable. They want fun gifts and images, and relevant links.

Populating a tweet with extra keywords, hashtags, or wordiness will just turn off your audience. The 280 characters are there when you need them. If you have a tweet that would work with 140 characters, stick to the old limit! Have a colleague check out your tweets before you send them out to make sure you aren’t getting overly wordy just because you can.

Have fun crafting tweets with the new character count, but don’t go crazy! Interested in more social media advice from DemandZEN? Drop us a line. 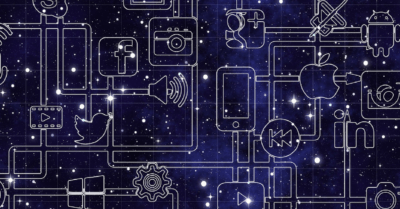 As a B2B marketer, you’re probably trying to understand LinkedIn ads vs Facebook ads. You want to use ...
Read More →

Every marketing team knows that when it comes to strategy, the work done needs to support its company’s ...
Read More →
Posted in Social Media